A rare rest from Wedding Stationery this week, when Mildred from Northern Ireland asked me to make 2 concertina books. One for her mum's 90th Birthday, One for her Brother and one for her sister. 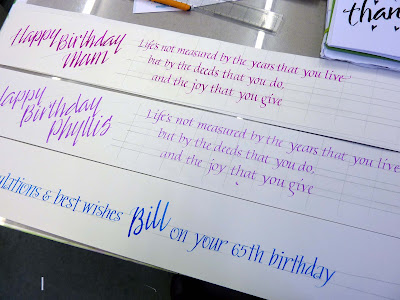 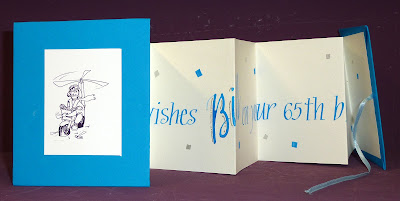 And her mums was Burgundy and hot pink

And here they are all wrapped up and ready to go.... 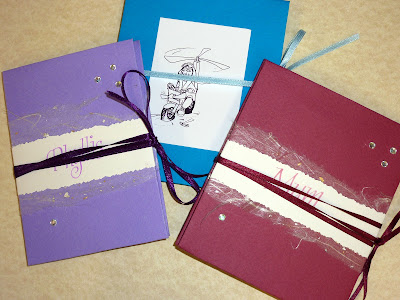 What Mildred said about her commission...


Hi Sue,
With mum and your great works of art are here!
Bill with absolutely love his
and mum did too!
You are just brilliant!
Thank you friend! Love Mildred.

To see more Concertina Cards
CLICK ON THIS LINK HERE
Posted by Sue Simpson at 3:09 pm No comments:

I've now lost count of the number
of these signs I have made over the last year.

They can be used for Wishing Wells,
Post Boxes and Wishing Trees

I love making them as they give me chance to write out the Bride and Grooms names in beautiful calligraphy
and in colour schemes to match their Wedding Theme!

This one is in Teal.... a glowingly
popular colour and my very first order in this colour...
It looks great! The Bride and Groom chose
gold foil lettering on a white background. 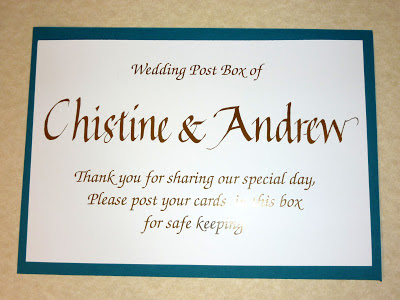 Jonathan and Danielle's
wishing well sign was made
in Cadbury's purple... stunning! 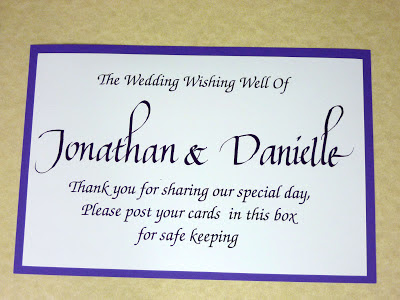 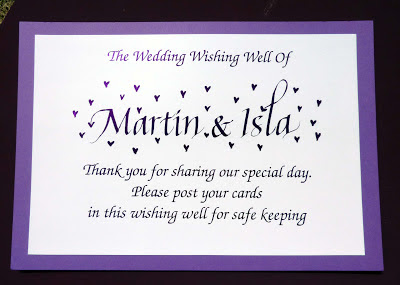 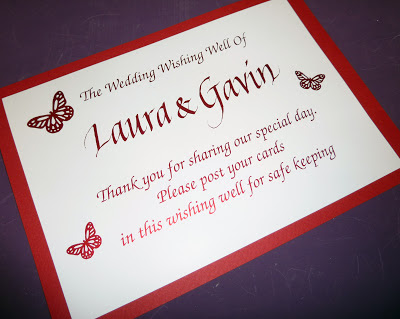 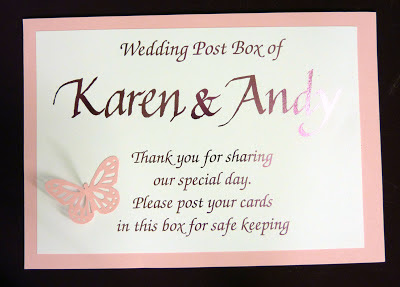 Darren and Fiona went for Hot Pink
for both Foil and Card. Hot pink
looks stunning with black too! 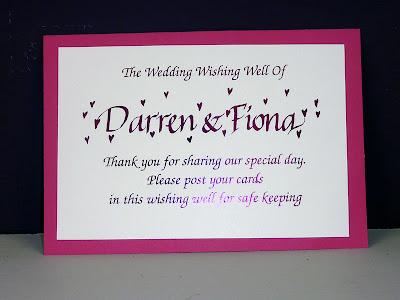 If you are getting married....
what's your colour scheme?
I'd love to know!

Either leave a comment below...
or on our Facebook page.
See the link in the side bar to the right!
All pictures (c) Sue Simpson
inspiredbyscript@yahoo.co.uk
Posted by Sue Simpson at 11:01 am No comments:

BRIDES ON A BUDGET - CHEAP or GOOD

I should have titled my this post 'How saving money can cost you more!'. If you haven't already read it, I suggest you pop over there and do so now. It really is a case of Buyer BEWARE!.

I've got a bee in my bonnet and I'm out to save the world, although that's how it seems right now! I joined the Bridal Forum to find out, what Brides of today are looking for in their suppliers as well as getting an insight into my own industry.
As I stated in my last post, nearly ALL the Brides start their question off with

"I'm on a very tight budget, can anyone tell me where is the cheapest I can get (insert Brides particular need here)"

I've seen them ask for everything,
Can anyone recommend a cheap photographer?...

Does anyone know anyone
who can supply cheap wedding stationery?

Where can I get cheap Wedding Cakes made?

What more than worries me slightly here is the fact that they are not asking for 'good' or 'Quality'. Does this mean that any photographer will do? If so.... you could ask your uncle George.... he's just bought a new camera and he's took some lovely pictures of his holiday in Cornwall...Now I'm not saying Uncle Jack wouldn't take a few good snaps, but if he falls short of capturing your 'Special Day', there's no resitting and certainly no room for error. This is one area I wouldn't scrimp on. BTW - If you live in North Yorkshire I can highly recommend Mark Johnson Photography he's both affordable and good!

Anyone know of anywhere I can get cheap Wedding Stationery?...... Well my stationery starts at 75p per invite. I use only quality products and I wouldn't say that that was out of this world. However if you wanted folded cards as opposed to postcard type we are looking at around £2 each.
The advantage I can offer over others, apart from the quality of card stock and materials is that you get a personal one-to-one service and we can design something around you and your colour scheme... oh yes and all our stationery is personalised and foiled. Could I do them cheaper? Yes.... of course.... I could print them out on photocopying paper in plain black ink and using computer font not calligraphy.... I 'could' but I won't! I want to be happy to put my name on my work and I want you to be happy too.

And what about cakes (or any other product or service) Do you really want CHEAP.... or do you want GOOD. Good can still be affordable, you just have to compromise a little.

At the same time... paying a fortune doesn't always mean good either. Advertising in some of the larger branded products is designed to make you 'exclusive' club. The one where you believe that if you don't have it then you are not worth the air that you breathe and are just not up to speed.

There really has to be a happy medium here. You can buy good, quality, items and services, but go for CHEAP at your peril. There are bargains to be had out there, but go off recommendations.... better still SHOP LOCAL. This way you can be sure of meeting the person face to face, seeing if you actually 'like them', asking any questions and having time to think about your choice before making a decision and potentially loosing money.

Can I just say..... that 99% of the email request I get start with...
"How much"
It's  sometimes a really hard question to answer as it depends on so many things. Mostly I have to email back with a list of questions, so that I can establish what my client actually NEEDS from me. It's all part of the job! And never forget... YOU are the one in charge.  It's your hard earned cash! Be careful when ordering ANYTHING off the internet or Facebook.
Meet the supplier a few times if you are unsure... better to be safe than sorry and a professional supplier would not mind how many times you have to meet and what questions they need to answer. YOU pay our wages :-)

I'll write another blog soon about this with some helpful guidelines to help you along the way.

What would the first question be,
when you approach as supplier
about their gods or services?

Email ThisBlogThis!Share to TwitterShare to FacebookShare to Pinterest
Labels: Advice for Brides

BRIDES ON A BUDGET - BEWARE!

I belong to a few Bridal Forums. They're a great to see what the Brides and Grooms of today are looking for and stay 'current'.
It's a place where we (as suppliers) can offer our gods and services and also a place where Brides can come for questions they may need help with.

There's a huge range of questions but most of all the Bride starts their request off with
"I'm on a very tight budget.........
(Followed by what they are looking for)

This really plays on my mind, because I have known so many Brides ripped off by unscrupulous traders
offering a so called "Bargain".

Kayleigh happened to mention in a Facebook Bridal group that she had been ripped off by someone in Scotland offering her
a Bargain Priced Crystal Bouquet!
Kayleigh liked what she saw on the sellers page and ordered a few! Of course, the supplier wanted paying 'up front'. The Bouquets arrived and were found to be plastic, not crustal and of a very poor quality.

Kayleigh complained, by writing numerous email s and leaving messages on Facebook. It didn't help. The supplier did not answer and when she did, she said that she had never had any complaints before. I got on her case, put Kayleigh in touch with Trading Standards... but the woman simply closed her page down.... Gone.... just like that.... and overnight. Taking Kayleighs and probably lots of other peoples money with them.

Then there was a on-line shop, offering very cheap, branded Wedding Dresses at a fraction of the original  price. The Brides could secure their dress of their dreams by paying just £100 deposit... of course, word got round and Brides flocked to pay their hard earned cash. This went on for a few months. The company opened new websites, with new names and still the money poured in... with expectant Brides anxiously awaiting their dresses. You can imagine what happened next.
Yes.... once again... the websites closed and the companies vanished without a trace. Some Brides had paid in full

The Police are involved and Brides have been hit all around the country. Some loosing hundreds of pounds. And I could tell you so many stories like this..... but I'll leave that until another time.

Let's get back to Kayleigh. She was a little embarrassed to tell me she had also been ripped of by a pretty well known company. Their website looks pretty good and you wouldn't know if from the web address.... but this company is based in China! Her cards arrived, the glossy mustard coloured card is pretty awful, you can't write on them so the company have to supply a pen with each order.... and even worse, when they came they were English one side which said Happy Wedding and on the other it was Portuguese!  No kidding!
She could have returned them, but I expect the chance of a refund would have been VERY slim and the postage would have cost a fortune. So the cards she bought at a very good price, were in fact unusable.

I offered to rescue them as best I could....
but there was nothing for it but to make a whole new insert.
A bit of a pain in the bum, because the size was a really awkward size. The picture below shows the company's
on the left from http://lightinthebox.com
And my newly designed on on the right..... 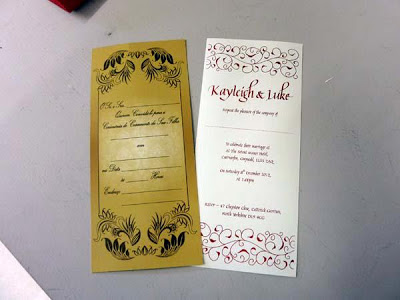 Kayleigh has just returned to me for her
Evening Invitations.... 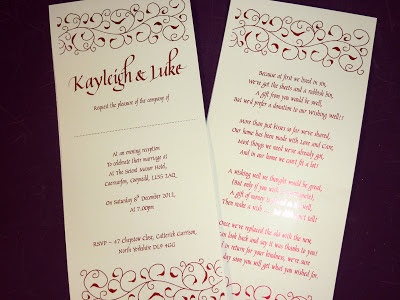 And 50 Wedding Scrolls to be used as little favours.

I try and do my best to advise Brides when buying their Wedding stuff. I'm planning on writing some posts in the near future about this exact subject.... in the hopes that it at least saves some Brides a great deal of money.


In my opinion, if a deal sounds too good to be true....
it very usually is! BUYER BEWARE!

What advice would you give a Bride
to save her from getting ripped off?

Please leave a comment below,
or on our Facebook page
Posted by Sue Simpson at 3:43 pm No comments:

I've been asked by a fellow Wedding Supplier
and Planner to come up with some ideas
with the Brides Theme being... Peacock Feathers...

First off a Turquoise and Royal Blue.... 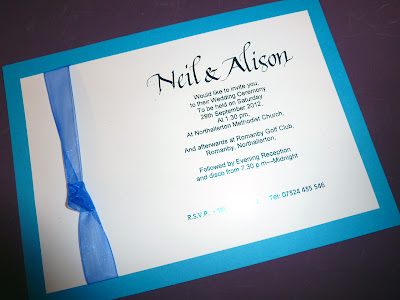 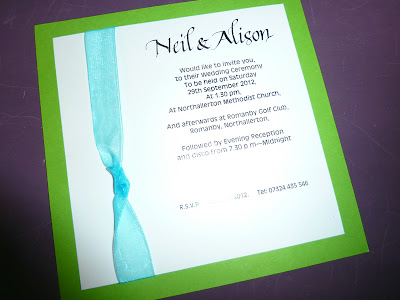 And Turquoise and Lime Green..... 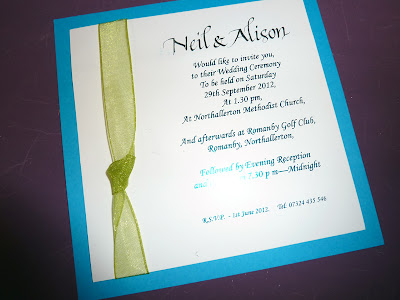 Which is your favourite?

I'll let  you know which one the Bride goes for
Posted by Sue Simpson at 1:50 pm No comments:

I have to admit.... I don't like Brown butterflies.
But as a Wedding Stationery I do as I am asked. 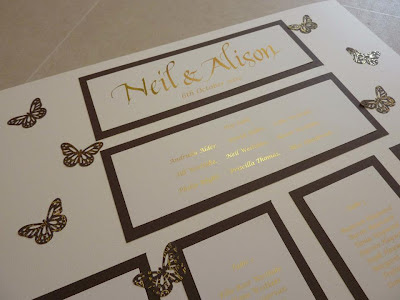 This one was for Neil & Alison
from London.

The colour scheme asked for was,
Brown, Ivory and Gold. 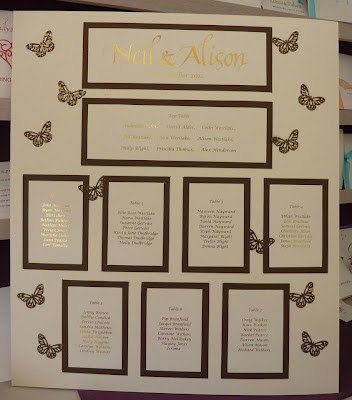 Unfortunately, the deadline was tight,
so these are some rather rushed photos
so I could get it in the post. 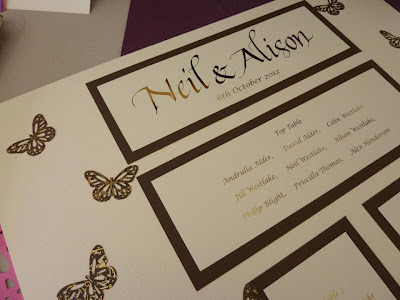 to be fair.... although it's not to my taste, it did make quite a change from the Fuchsia Pink that keeps cropping up at the moment. And the Gold on Ivory was really nice!

I've been working on some new designs.
Here's the Tendril Hearts Design.

A Filigree and tendril filled heart design.
Perfect for those who want something a little different.

Remember we have over 15 colours of foil to choose from,
so we can match your colour scheme to give you something truly unique!

See our main website side bar to select your colour at
http://northyorkshireweddings.co.uk

Posted by Sue Simpson at 2:14 pm No comments: 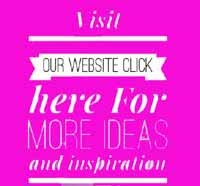